What evil spirit have you familiarity with?
None.
Have you made no contract with the devil?
No.
Why do you hurt these children?
I do not hurt them. I scorn it.
Who do you imploy then to do it?
I imploy no body.
What creature do you imploy then?
No creature. I am falsely accused.

Dialogue based on the examination of Sarah Good by Judges Hathorne and Corwin,
from The Salem Witchcraft Papers, Book II, p.355 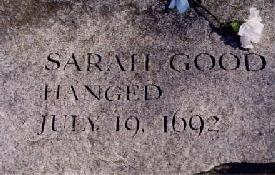 Mid-February
Unable to determine any physical cause for the symptoms and dreadful behavior, physicians concluded that the girls were under the influence of Satan.

Late February
Prayer services and community fasting were conducted by Reverend Samuel Parris in hopes of relieving the evil forces that plagued them. In an effort to expose the “witches”, John Indian baked a witch cake made with rye meal and the afflicted girls’ urine. This counter-magic was meant to reveal the identities of the “witches” to the afflicted girls.

Pressured to identify the source of their affliction, the girls named three women, including Tituba, Parris’ Carib Indian slave, as witches. On February 29, warrants were issued for the arrests of Tituba, Sarah Good and Sarah Osborne.

Although Osborne and Good maintained innocence, Tituba confessed to seeing the devil who appeared to her “sometimes like a hog and sometimes like a great dog”. What’s more, Tituba testified that there was a conspiracy of witches at work in Salem.

Over the next weeks, other townspeople came forward and testified that they, too, had been harmed by or had seen strange apparitions of some of the community members. As the witch hunt continued, accusations were made against many different people.

Frequently denounced were women whose behavior or economic circumstances were somehow disturbing to the social order and conventions of the time. Some of the accused had previous records of criminal activity, including witchcraft, but others were faithful churchgoers and people of high standing in the community.

March 12
Martha Corey is accused of witchcraft.March 19Rebecca Nurse was denounced as a witch.March 21Martha Corey was examined before Magistrates Hathorne and Corwin.

March 24
Rebecca Nurse was examined before Magistrates Hathorne and Corwin.March 28Elizabeth Proctor was denounced as a witch.

William Hobbs
“I can deny it to my dying day.”

May 2
Sarah Morey, Lydia Dustin, Susannah Martin, and Dorcas Hoar were examined by Hathorne and Corwin.

Dorcas Hoar
“I will speak the truth as long as I live.”

May 4
George Burroughs was arrested in Wells, Maine.

May 9
Burroughs was examined by Hathorne, Corwin, Sewall, and William Stoughton. One of the afflicted girls, Sarah Churchill, was also examined.

May 10
George Jacobs, Sr. and his granddaughter Margaret were examined before Hathorne and Corwin. Margaret confessed and testified that her grandfather and George Burroughs were both witches.

May 14
Increase Mather returned from England, bringing with him a new charter and the new governor, Sir William Phips.

May 18
Mary Easty was released from prison. Yet, due to the outcries and protests of her accusers, she was arrested a second time.

These magistrates based their judgments and evaluations on various kinds of intangible evidence, including direct confessions, supernatural attributes (such as “witchmarks”), and reactions of the afflicted girls. Spectral evidence, based on the assumption that the Devil could assume the “specter” of an innocent person, was relied upon despite its controversial nature.

June 2
Initial session of the Court of Oyer and Terminer. Bridget Bishop was the first to be pronounced guilty of witchcraft and condemned to death.

June 10
Bridget Bishop was hanged in Salem, the first official execution of the Salem witch trials.

Bridget Bishop
“I am no witch. I am innocent. I know nothing of it.”

Following her death, accusations of witchcraft escalated, but the trials were not unopposed. Several townspeople signed petitions on behalf of accused people they believed to be innocent.

Rebecca Nurse
“Oh Lord, help me! It is false. I am clear. For my life now lies in your hands….”

Mid-July
In an effort to expose the witches afflicting his life, Joseph Ballard of nearby Andover enlisted the aid of the accusing girls of Salem. This action marked the beginning of the Andover witch hunt.

Elizabeth Howe
“If it was the last moment I was to live, God knows I am innocent…”

Susannah Martin
“I have no hand in witchcraft.”

Martha Carrier
“…I am wronged. It is a shameful thing that you should mind these folks that are out of their wits.”

George Jacobs
“Because I am falsely accused. I never did it.”

Mary Bradbury
“I do plead not guilty. I am wholly innocent of such wickedness.”

September 19
Giles Corey was pressed to death for refusing a trial.September 21Dorcas Hoar was the first of those pleading innocent to confess. Her execution was delayed.

October 8
After 20 people had been executed in the Salem witch hunt, Thomas Brattle wrote a letter criticizing the witchcraft trials. This letter had great impact on Governor Phips, who ordered that reliance on spectral and intangible evidence no longer be allowed in trials.

October 29
Governor Phips dissolved the Court of Oyer and Terminer.

November 25
The General Court of the colony created the Superior Court to try the remaining witchcraft cases which took place in May, 1693. This time no one was convicted.

Mary Easty
“…if it be possible no more innocent blood be shed…
…I am clear of this sin.”