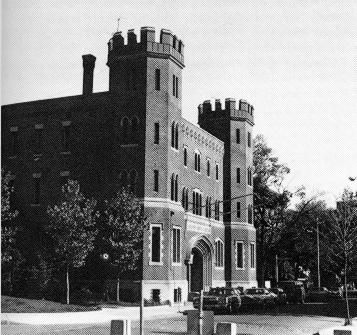 Photo from Architecture in Salem by Bryant Tolles

The Salem Armory was constructed for the Second Corps of Cadets between 1890 and 1908. In 1890, the Second Corps purchased the home and property of Colonel Francis Peabody. The residence was adapted to serve as the Cadet headquarters. The drill shed, now occupied by the Salem Visitor Center, was erected at that time. In 1908, the former residence was torn down and replaced with a new head house designed by John C. Spofford to reflect the popular 19th century armory architectural tradition.

The Second Corps of Cadets and Company H, Eighth Regiment, Massachusetts Volunteer Militia, who shared occupancy of the armory from 1908, had long and honorable traditions of service to the Commonwealth of Massachusetts and the Federal government. The Second Corps of Cadets was formed in 1786. Company H had its beginnings in 1805 as the Salem Light Infantry. Members of both organizations participated in the Civil War and Spanish American War. During World Wars I and II, they served as members of the 26th (Yankee) Division, Massachusetts National Guard.

The Salem Brass Band was organized in 1837 and attached to the Salem Light Infantry. Patrick S Gilmore‘Father of the American Band’, led the Salem Brass Band for serveral years from 1854 until leaving to take charge of the Boston and New York Military bands and later his gigantic jubilee concerts which made him the rival of Souza. Later, Sousa and his famous band also played in Salem. The Armory was also home to the Salem Cadet Band and it’s spring concerts under the direction of Jean Missud.

At least until 1948, the Armory was home to two Civil War portraits painted by the portrait artist, J Harvey Young, who lived on Oliver Street as in Salem as a boy. Only three of Young’s works survived the great Boston Fire of 1872. Soon after the fire, two portraits were presented to the Cadet Armory of Salem. The first portrait was of Elmer E. Elllsworth painted from life while he was in Salem and Boston with his celebrated Zouaves. The other portrait was of Corporal Francis Brownell, “Ellsworth’s Avenger”, also painted from life. Ellsworths other claim to fame was that he was the first person embalmed in this country.

On October 4, 1912, President Taft was in Salem to dedicate a bronze tablet at the Essex Institute in memory of the First Heavy Artillery of Massachusetts Volunteers who served in the Civil War. Among the 3000 people who attended the pre-dedication exercises in the Armory were 120 survivors of the Civil War first regiment. 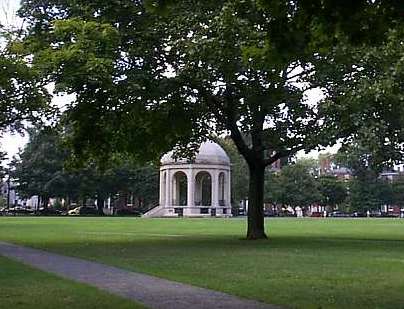 The Jean Missud Bandstand on the Common

The Armory halls were used for graduations, political events, annual Chamber of Commerce dinners, and society’s Charity balls. It served as a food pantry after the disasterous fire of 1914. In 1917, Salem’s three Cadet batteries of Artillery and Company H of the Eighth Infantry served in France for 18 months. During quieter times, the Salem Cadet Military Band and the Salem Light Infantry Band gave frequent concerts at the Willows and the Common.

On July 7, 1926 the official banquet celebrating Salem’s 300th year was held in the Armory with Vice President Dawes, Governor Fuller of Massachusetts and several senators in attendance. On the following day, the Armory hosted a Grand Ball where a large group of young people danced the minuet.

A crowd of more than 5000 jammed the Armory on November 1, 1933 as Franklin D Rosevelt received a wild reception on a campaign stopover on a trip from Portland, Maine to Boston. The Salem News reports: As the New Yorker’s car drives into the Armory, he is cheered to the echo, and police hold back the surging crowds..’. Supported by his son James, the candidate tells the people ‘how great it is to be back in Salem again’, that the visited ‘the historic city many times during my school days at Harvard’.

The Armory was also the site of the 1976 Bicentennial Ball.

Mitch Ryder and the Detriot Wheels played the Armory. It was also home to the pro wrestling on occasion.

The Salem Light Infantry, also known as the Salem Zouaves, was among the first units to respond to Lincoln’s call for volunteers in 1861. On April 18th, just three days after Lincoln’s call, the regiment left Massachusetts and was deployed at Annapolis, Md., and Washington, D.C. The Zouaves were attached as Company I of the 8th Massachusetts Regiment (the “Minute Men”), under the command of Captain Arthur F. Devereux, son of a former Adjutant General of the state, George H. Devereux. The Zouaves were formally mustered into the U.S. service as a three months regiment on April 30th and during the three months’ campaign, they served at Annapolis, guarding the U.S.S. Constitution, at Relay House, Md. (May 11-June 26), and at Baltimore (June 26-July 29).