A common sight in 19th century Salem was a house being dragged down a city street by oxen on its way to a new location.
In 1818 William Roberts, a mason who would later build the East India Marine Hall, St. Peter’s Church, and the Salem train depot, bought a house at the corner of Mall Street opposite the Salem Common. Roberts then set out to move the house to a lot on the southwest corner of Federal Street and Federal Street Court that he had purchased from the Pastor of the Roman Catholic Society of Boston, John Cheverus.

Smaller sections of the house were easily transported across town but the main body of the massive three-story building went reluctantly. Writing in his journal on May 20, 1818, Salem diarist William Bentley noted town residents “have been amused, not to say affronted” by the proceedings.

“The main house was dragged into the street” Bentley recounted, ” and stood for a week. Yesterday it passed St. Peter’s Church. The pumps on the street corner were removed and the cornerstone of the church, and after a long day’s work, with a team of sixty oxen with proper drivers and with screws, chains and cables, I saw it turned. The operation did no honor to their judgement.” 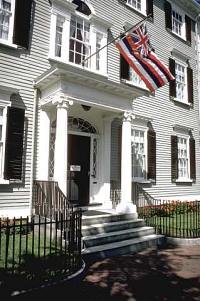 Perhaps this traffic-snarling incident was in the minds of the Salem City Councilors who balked at giving Caroline Emmerton permission to move the 1682 Hathaway Bakery building from the corner of Washington and Federal Streets to the grounds of the newly restored House of the Seven Gables. Emmerton was finally able to convince the councilors that the bakery was of historic value and was given the green light to move it.

The building was transported in three sections along Bridge, Webb, and Derby Streets to its new home on Salem harbor. In “The Chronicles of Three Old Houses” Emmerton noted that “when each part of the house arrived it looked like the Birnam Woods, having torn off a great deal of foliage from the overarching elms on the way down.”

One of the longest distance moves of a historic Salem property involved the Stephen Phillips Memorial Trust House  at thirty four Chestnut Street. The Phillips house was once part of Nathaniel and Elizabeth (Derby) Wests’ Oak Hill Farm, now the site of North Shore Shopping Center. The couple divorced in 1806 and Elizabeth was awarded the farm. When she died in 1814 the property passed to her three daughters with the provision that none of it end up in Nathaniel’s possession.

When the couple’s daughter Sarah died in 1819, however, West somehow inherited this structure, which was part of the estate. Soon after he had it moved on wheels three miles to Chestnut Street and installed a central hallway and a full third floor. The home was bought by Stephen W. Phillips in 1913 and turned into a museum by the Phillips family in 1971 after the death of his son Stephen.

One house move had a tragic ending. On January 25, 1796, Nathaniel Richardson was crushed by a house he was moving down Daniels Street towards the harbor. Richardson, whose tannery on the eastern side of the Salem Common was the largest in Essex County, slipped and fell onto a pile of timbers just as the house slid off its cradle in his direction. Death was instantaneous.