One of the more delightful new publications available to local lovers of history and horticulture is the Salem Garden Club’s recently reprinted booklet, “Old Salem Gardens.”

This charming 71-page pamphlet was written by Mable C. H. Pollack and was originally published by the Salem Garden Club.in May, 1946. The booklet grew out of a number of papers given by club members at the organization’s tenth anniversary celebration in 1938. It was later expanded by Mrs. Pollack and her committee to include brief articles about historic gardens, personal remembrances, illustrations, and even a poem, all related to local horticulture lore.

“Old Salem Gardens” received rave reviews in a number of important horticultural and botanical journals. The edition of 500 copies was quickly sold to individuals and institutions across the country. Among the purchasers were the Metropolitan Museum of Art in New York and the Franco-American Museum in Blerancourt, France.

The publication, which won awards from both the state and national federations of garden clubs, is only one of the many contributions made by the Salem Garden Club’s to the community. For nearly three quarters of a decade the organization’s members have worked for “the advancement gardening, the development of home grounds, civic beautifying, and aiding in the protection of forests, wildflowers, and birds.”

The Salem Garden Club was organized in January, 1928 and by its second meeting had already reached its limit of 60 members and 25 associate members. The following year the club joined the Garden Club Federation of Massachusetts.

The organization’s first decade was one of intense activism. In 1930, at the suggestion of local architect Phillip Horton Smith, members rebuilt (and subsequently maintained) the garden at the Brookhouse Home on Derby Street. For a few years in the 1930s the club also sponsored a garden contest for children who were active in the Salem summer playground program. Cash prizes were awarded to the youngsters in each of the city’s wards who were deemed to have grown the best home gardens. 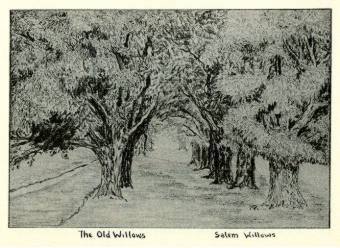 Beginning in 1929, the Salem Garden Club began participating in the annual spring Flower Show in Boston. By 1938 the organization felt secure enough to hold its own horticultural show in historic Hamilton Hall on Chestnut Street. To raise money for the event, the club sponsored the city’s first garden tour in the summer of 1937. More than 300 people visited the ten gardens, some on Chestnut and Federal Streets and others in the Salem Common neighborhood, that were open to the public.

A second, smaller garden tour was held in 1941 to celebrate the opening of the Gardner-Pingree House on Essex Street. The Salem Garden Club had taken on the responsibility for the replanting of the garden at this magnificent Federal mansion which had been designed by the great Salem architect, Samuel McIntire.

The beginning of World War II forced the Salem Garden Club to curtail many of its activities. During the course of the conflict, Mrs. Willis Ropes, the group’s conservation chairperson, provided advice and assistance to citizens wishing to plant their own war gardens.

The activism of the Salem Garden Club’s first decade gradually reappeared after the war and escalated in the 1970s and 1980s. During that period the organization was involved in planting and beautifying efforts at Lappin Park in Town House Square, Winter island, the Salem Common, and Shaughnessey Hospital. Club members also planted and maintained gardens in traffic islands on either end of Washington Street and flower boxes at Salem City Hall and the Bowditch House on North Street. 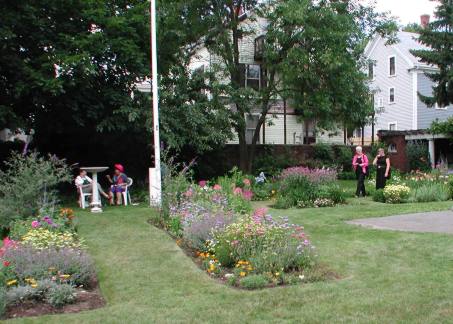 In 1978 the organization began offering an annual scholarship to a student who planned to study horticulture, the environment, or a related field.

A few years later, the Salem Garden Club began a tradition of participating in the annual “Christmas in Salem” house tour initiated by the Salem Visiting Nurse Association and now run by Historic Salem, Inc. The club also took on the yearly task of decorating a room in the House of Seven Gables for the Christmas season.

In addition to these projects, and to serving as guides and participants at the Topsfield Fair and the annual “Art in Bloom” show at the Museum of Fine Arts, club members also built or helped to build gardens at Camp Naumkeag and at the Custom House at the Salem Maritime National Historic Site.

In 1991, the Salem Garden Club “returned to its roots” when it replanted the long-abandoned gardens at the Brookhouse that its former members had so lovingly cultivated 60 years earlier.