The Ups and Downs of Saving Buildings

The Ups and Downs of Saving Buildings

The current rehabilitation of the Newmark Building, the Daniel Low warehouse and the Peabody Block complex calls to mind stories of preservation wins and losses — and even an occasional draw — in the vicinity of Town House Square.

Just west of the square, for example, at 260 Essex St., once stood the Saunders Block. In the early 1960s the city decided the lot on which it stood was needed for parking. Preservationists fought to save the building, which Abbot Lowell Cummings, a noted architectural historian, said was one of just two extant 18th century row houses in Massachusetts. But after efforts to find a way to move the building failed, the Saunders house was razed in 1965. Apparently the city later reassessed its need for all that parking. Today a new, multi-story brick office building stands on the former Saunders house site. 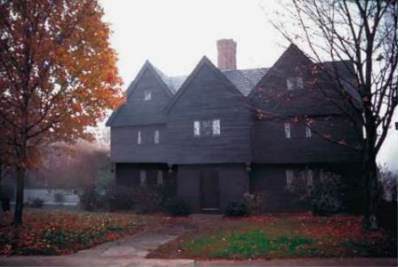 The nearby commercial building at 266 Essex St. was erected in 1761 as a residence for Timothy Orne, one of Salem’s wealthiest and most important citizens before the American Revolution. The three-story, quoined Georgian mansion was later adapted for commercial use and is currently occupied by Bowman’s Bakery. Its many wonderful architectural features are somewhat offset by the first-floor picture windows.

Two other important Essex Street buildings, the house in which Alexander Graham Bell lived when he invented the telephone, and the Corwin House, the former home of witch trials judge Jonathan Corwin, met opposite fates.

The Bell house, which was actually owned by the Saunders family, was bulldozed to make way for the Salem YMCA in the 1890s. The Corwin House was restored by Historic Salem, Inc in the mid-1940s. The building was renamed the Witch House and is now operated by the city of Salem as a museum. 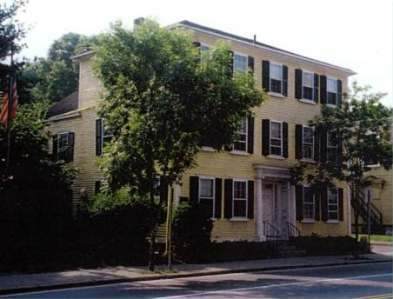 More than one-fourth of the nearly $50,000 raised to restore the Witch House and acquire the adjacent Bowditch House  was contributed by William Barker of 39 Chestnut St. Barker and other interested parties had at one time pledged $70,000 to be used for the acquisition and restoration of the Corwin House, but the owners refused to sell.

Barker then deposited $10,000 with the Essex Institute, which was to be used for the purchase of the building should it become available for sale before Dec. 31, 1944. When that deadline passed, the Barker fund, plus $3,302 in accrued interest went into the Essex Institute’s general fund.

The following year the museum gave the money to Historic Salem, Inc. to be used for Barker’s intended purpose.

Two of the area’s “lost” architectural treasures had connections to the Derby family. The Pickrnan-Derby-Rogers-Brookhouse mansion on the comer of Washington and Lynde streets was built for Benjamin Pickman Jr. in 1764.

Elias Hasket Derby bought it in 1786 and hired Samuel McIntire, Salem’s noted architect and carver, to renovate it.

McIntire added a cupola, from which Derby could scan the horizon for returning ships, and a rear stable. The cupola Ceiling was adorned with a fresco depicting Derby ships painted by the artist Michele Corne. Another Salem artist, John Rogers, who later became nationally known for his statuary, was born in the house in 1829.

The mansion was torn down in 1915 and replaced by the Masonic Temple. The cupola was moved to the Essex Institute.

The former mansion of Elias Derby’s Son Ezekial Hersey Derby survived until the early 1970s before it was razed to make way for the Salem Five Cent Savings Bank addition at 206-8 Essex St. Ezekial’s home was designed by the famous Boston architect Charles Bullfinch in 1800 and was adorned with carvings by Samuel McIntire.

The mansion was later owned by Benjamin Crowninshield and then Richard Rogers. In the early 1900s the building was remodeled for commercial space. By the time it was razed, the structure had deteriorated to the point where it could not be restored.

Just a block south of Town House Square stands one of Salem’s preservation success stories. The brick Federal mansion at 148 Washington Street was erected on a bluff overlooking the South River (later filled in) in the mid-1780s, for merchant Joshua Ward. Samuel McIntire is known to have been responsible for some of the wood- work in the house. 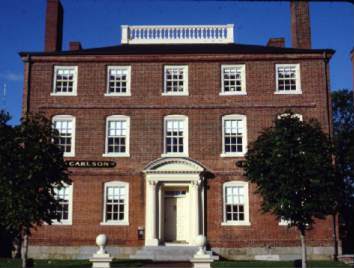 George Washington stayed in Ward’s mansion during his visit to Salem in October 1789. In the late 19th century the mansion became the Washington Hotel.

Eventually a multistory commercial block was built on what had once been Joshua Ward’s sloping front lawn. In the 1970s a developer approached the Salem Redevelopment Authority with a proposal to buy the property, with the provision that the Authority “knock down that junk in back.” The “junk” he was referring to was the Joshua Ward mansion.

Fortunately, the SRA refused the offer. Instead, the commercial addition was bulldozed and the Ward House was restored in 1978-9 with the help of a grant from the Massachusetts Historical Commission.