While preparing for a course on North Shore art and artists, it occurred to me that Salem harbor has also attracted the attention of some of America’s premier painters. Our own Frank W. Benson , who grew up on Washington Square, spent much of his boyhood sailing, fishing and shooting in local waters. His first etching (1882) depicted vessels under sail and was entitled Salem Harbor.

The great impressionist Maurice Prendergast produced at least two watercolors of the harbor at the turn of the century: April Snow, Salem and Salem Willows in Winter. And the Whitney Museum of New York owns a 1929 rendering of the former Naumkeag Mills complex by the noted American realist Edward Hopper.

The Mills, actually Naumkeag Steam Cotton Company were organized by Nathaniel Griffin in 1839 and built with capital raised through the sale of stock to area residents. By the time Construction was completed in 1848, the number of investors had grown to 1,458.

The mill buildings were built by Charles James and were the first in America to be driven by steam rather than hydro power. Coal for steam engines and materials for ongoing construction projects were stored on nearby Union (now Pickering) Wharf. The mill and the wharf were connected by the Union Street Bridge, and all three went down in the Fire of 1914.

The company rebuilt immediately after the fire, and at its peak employed almost 2,000 workers. It became famous for its Pequot brand of sheeting and its departure for South Carolina in the early fifties was a serious blow to the local economy.

Pickering Wharf was developed as a commercial-residential-marina complex in the mid 1970’s. The wharf was originally built as a cooperative venture in the late 1720’s, hence its former name. “Union Wharf.”

Jeggle’s Island, now the site of the Chase House, was incorporated into the wharf at the time of construction. Eventually, George Pickering took over the wharf for coal storage and his firm was a presence on the site until selling it to the City of Salem in 1975 for $250,000, half its assessed value.

Nearby Derby Wharf dates back to pre-Revolutionary War days. The original portion was constructed by the Derby family in 1762 and the wharf was extended to its present length in 1806. Derby Wharf became part of the Salem Maritime National Historic Site after the latter was established in 1938.

While noted as a privateering and East India trade center, Derby Wharf also had some interesting tenants in the late eighteenth and early nineteenth centuries. In addition to the sailmakers, coopers, carting services and stores one would expect to find on a wharf, there were also, at the turn of the century, a junkyard, A.C. Pettingell’s wholesale fish dealership, and the Boston and Northern Street Railway Company. Pettingell’s sold processed fish under eight different names including the ever-popular “Witch City” brand. The railway company used its Derby Wharf facility for streetcar storage and repair.

Northeast from Derby Wharf, past the famed House of the Seven Gables and at the mouth of Salem Harbor sits Winter Island, a popular Salem recreation area. The island was the earliest center of the town’s flourishing fishing industry.

In 1936-1937, some two dozen fishermen were given land on the island and adjacent mainland on which to build houses, drying racks and wharves. The two coves flanking the causeway to the island, Cat Cove and Winter Harbor, provided safe anchorage for the small fishing vessels.

John Holgrave was granted a license in 1637 to keep an ordinary for the entertainment of strangers in his home at the mainland end of the causeway. Winter Island later became the site of one of Salem’s earliest forts. Begun in 1643, and frequently rebuilt and repaired over the centuries, the Winter Island fort has been known as Fort William and, since 1799, Fort Pickering. It was manned during the War of 1812, the Spanish-American and Civil Wars. The remnants of the fort can be seen adjacent to the Winter Island lighthouse. 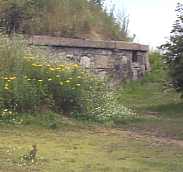 The island was also the “birthplace” of the Essex, the famed Salem frigate built as the town’s contribution to the American navy in 1798. Master shipbuilder Enos Briggs built the 850 ton vessel on the shore running between the harbor master’s office and the restaurant because it was the only place in Salem Harbor deep enough to launch it. Approximately 12,000 people showed up to see the launching in 1799.

The same number turned out for the hanging of Bryan Sheehan in 1772 on the island’s “Execution Hill,” adjacent to the remnants of the former Coast Guard administration building. Just before being hanged for rape, Sheehan admonished the assembled multitudes to avoid falling in the wrong crowd, noting that had been his downfall.