April 2005 marks the 200th anniversary of Hamilton Hall , one of the city’s architectural treasures and a longtime gathering place for the region’s cultural and social elite.

While the most famous of the facilities built in Salem for private gatherings, Hamilton Hall was not the first. That distinction belongs to Assembly Hall, erected in the 1760s on the rear portion of the park that today occupies the lot on the opposite corner of Cambridge and Chestnut streets from Hamilton Hall.

The Assembly Hall was the scene of many a fashionable ball attended by the town’s elite. Two of the most memorable functions held there during its relatively brief history took place in spring 1774. On April 28 Salem’s Tories gathered at the hall to bid farewell to Gov. Thomas Hutchinson who was leaving for England. Five weeks later, many of the same citizens returned to welcome Hutchinson’s replacement, Thomas Gage.

In 1774 the hall was sold to a group of citizens who had left the Tabernacle Church to form a new religious society. The building was used for worship until 1804-05 when the Proprietors of the South Church hired Samuel McIntire to design their new home on the site. 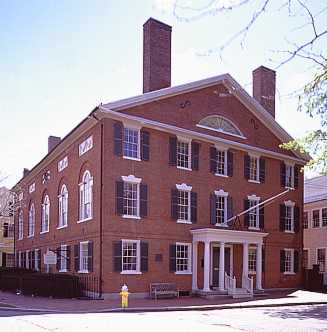 But even before its demolition, Assembly Hall would be replaced as the gathering spot for the town’s wealthier citizens by a new function hall, the Assembly House, which opened on Federal Street in 1782. This facility was built with funds raised through the sale of stock to Elias Hasket Derby, William Gray, Jr, and other members of Salem’s merchant class. The new hall was used for a variety of entertainment and functions, including concerts, theatrical productions, and gambling. Regular assemblies, or dances, were held in a ballroom which could accommodate crowds in excess of 200 people. In 1791 a Mr. Bowne exhibited his collection of wax figures of famous Americans, including George and Martha Washington and Ben Franklin at the Assembly House.

The real George Washington was honored with a ball at the Federal Street hall during his visit to Salem on October 29, 1789. Exactly five years earlier, the Assembly House had been the scene of a similar party for the Marquis de Lafayette.

In the mid-1790s William Stearns and Jonathan Waldo acquired almost all of the shares of Assembly House stock from their fellow proprietors. The pair sold the hall and, with a third partner, erected the Stearns Block on Washington Street. The building included an elegant, second-floor function hall named for the nation’s first president.

But Washington Hall’s reputation as the place to gather would soon be eclipsed by the appearance of a newer, even more elegant facility on Chestnut Street. That three-story brick building was erected on land acquired by Stephen Phillips from John Neal and was designed by Samuel McIntire.

This hall, named for America’s first Secretary of the Treasury, Alexander Hamilton, cost $22,000 and was owned by a group of stockholders led by Phillips, Willard Peele, Pickering Dodge, and Joseph Hodges. In 1820 the owners incorporated as the Proprietors of the South Buildings.

Hamilton Hall served as the gathering place for local Federalists, the political party of wealthy ship owners. The proprietors and their invited guests attended regularly scheduled assemblies where they danced the cotillion, the minuet, and the rigadoon. At ten o’clock the attendees might troop upstairs for a brief repast prepared by the hall’ s legendary caterer, John Remond. The evening ended at exactly the stroke of midnight, often in the middle of a dance.

In its early decades Hamilton Hall was also the setting for auctions, plays, concerts, and charity fairs. Special events included a Charles Dickens Tea Party and a Leap Year Party. The latter was a 19th century version of the Sadie Hawkins dances of recent decades. Men were invited to attend by a woman, and once the dancing began the women took the lead in choosing partners.

One of Hamilton Hall’s most exciting moments was a party honoring the Marquis de Lafayette during his second visit to Salem in 1824. Approximately 300 gentlemen of the town joined in toasting the beloved Frenchman in the hall which had been decorated for the occasion by their wives and other local women.

Today, a plaque commemorating the event can be seen at the western entrance to the building. The marker was a gift to Hamilton Hall from the American Friends of Lafayette in 1965.