The Trip to “The Willows”

For many North Shore residents, one of the most reliable signs that spring has arrived is that first box of popcorn, chop suey sandwich or game of skee-ball at the Salem Willows.

Salem Willows Park is truly one of the city’s treasures. The 35-acre waterfront site, once home to a contagious disease hospital, was designated a city park in 1858 and is named for the original white willow trees that were planted around 1800.

Like its counterparts in Revere, Nantasket, and Gloucester, the birth of the Salem Willows amusement park was linked to an emerging local transportation system. 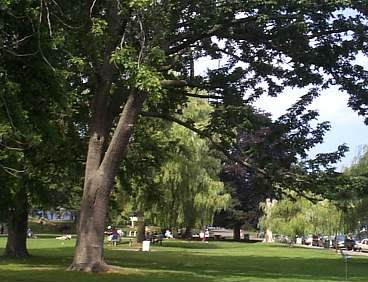 That park opened for business on June 10, 1880, and was an immediate hit with the public. A daily column in the Salem Evening News kept track of happenings at the seaside park and reported as many as 10,000 visitors in a single day. Many arrived on the Naumkeag Street Railway Company trolleys, which ran every 15 minutes from downtown Salem.

One of the major attractions on “the trolley line” was the Willows Pavilion. This rather unusual looking structure boasted a roller skating rink complete with a live orchestra, on the bottom floor, and a 300-seat restaurant on the second. A rear tower in the pavilion housed a camera obscura, a novel apparatus that projected scenes from as far away as Beverly and Marblehead onto a white table in an otherwise dark room.

Just opposite the pavilion was the Willows Park Theatre. Early events at this popular open-air venue were organized by promoter John S. Moulton and included concerts by Moulton’s own opera company. The always-popular Salem Cadet Band, led by the irrepressible Frenchman and Juniper Point resident Jean Missud, gave regularly scheduled performances. On Sundays the Cadet Band was restricted to programs of sacred music. 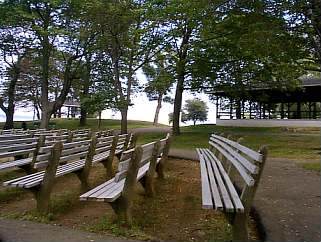 Thrill seekers gravitated toward the water chute at the intersection of Fort and Columbus avenues. Patrons were hauled up to the top of a tall slide in small “boats” and then sped down a long track into a pool of water below.

The less adventurous could enjoy a harbor cruise on the steamboat Three Brothers, ride the new carousel or test their marksmanship at the shooting gallery.

The carousel was located in the building at the end of the line that now houses Hobbs’ Restaurant. The merry-go-round was powered by a mule attached to a central post in the basement. The ride lasted only as long as the mule was willing to follow the prescribed circular route.

Visitors looking for a “shore dinner” at the Willows could drop in at Judge Chase’s Willow House (opened 1874) or Ebsen’s, on what would later become known as “Restaurant Row.”

Other eateries appeared along the line. The best known was Downing’s, which stood on the site now occupied by the Hobbs’ popcorn and ice cream stand until it was destroyed by fire.

Everett Hobbs and Wilbur Eaton first began selling popcorn and other products at the Willows in the mid-1880’s at a concession in the pavilion. In 1897 the partners founded the National Popcorn Company and opened a plant in Lynn on Western Avenue.

At that same time, the men acquired the aforementioned carousel building at the Willows. They sold popcorn, taffy, and other summer delights. In 1906, they introduced a new product — the ice cream cone — to the American public.

By the turn of the century the Willows amusement park was in full flower. From his tiny stand on the water side of Hobbs and Eaton’s, Patrick Kenneally hawked Spanish double-jointed peanuts to curious visitors. The sightless vendor was the first in the country to import this exotic item and was long remembered for his sales cry: “They’re double-jointed Spanish peanuts all the way from Barcelona. Try ’em be- fore you buy ’em.’

At the other end of the line, at the corner of Harbor View (now Bay View) Avenue, stood the Willows Casino. Professor Kenerson’s dance hall was a popular weekend destination and often attracted crowds in excess of 1,500 people on weekend nights.

Food establishments, a police station, and a post office (located in Downing’s Restaurant) could all be found on the strip between the casino and Kenneally’s peanut stand. Other attractions along the line included a shooting gallery, a pool room, and a photography studio.

By 1900, J.C.B. Smith was operating a slot machine arcade at the Willows. Apparently earlier sanctions against games of chance had been lifted.

Opposite Fort Avenue from the casino, on a knoll most recently occupied by the Tilt-A-Whirl and roller coaster, stood John W. Gorman’s Summer Theatre. Gorman offered a menu of vaudeville and other live performances at his open-air theater. He also promoted other events, including balloon ascensions, bonfires, and parachute jumps, at the Willows.

Adjacent to Gorman’s theater stood Brown’s Flying Horses. Joseph Brown, a native of Bavaria and an expert woodcarver, emigrated to America in 1870. He settled in Salem and opened a carousel that would be a fixture at the Willows for 70 years.

The merry-go-round featured horses, camels, lions, and other animals all carved by Mr. Brown in his studio on present-day Bay View Avenue. The horses’ tails and manes were made of real hair. Some of the wooden steeds were named after popular race horses of the day. Brown also carved the miniature village that stood in the center of the carousel. It took him 20 years to complete the tableaux that included wooden houses, churches, trees, and even a circus parade.

The carousel was originally turned by Mr. Brown, then by a real live horse. Eventually a steam driven engine was employed to power the carousel on its five minute one-mile trip.

Brown’s Flying Horses were a popular attraction until 1945 when Brown’s son-in-law, who operated the business for nearly 20 years, passed away. The horses were eventually sold to Macy’s Department Store and displayed in the chain’s New York store at Christmas.