At the mouth of Salem Harbor, closer to Manchester than to Salem, and inaccessible to the public, is an enchanting, 60-acre tract of land known as Baker’s Island.

Where Baker’s Island got its name is not known. It dates back at least to 1631 when the island was claimed by the newly organized Commonwealth of Massachusetts and its governor, John Winthrop.

Baker’s Island remained in the hands of the Colonial government until 1660, when the General Court granted a request by the town of Salem to annex both Baker’s and Misery islands. Attached to the legislation was a stipulation that fishermen be allowed to use any of the islands for curing fish and harvesting wood to build houses or fishing stages. 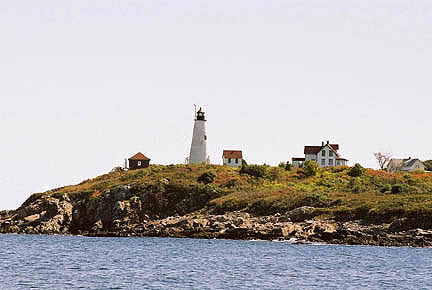 In 1670, Salem acted to prevent men from neighboring Marblehead from cutting and removing wood from Baker’s Island. Francis Collins was given the right to build houses on the island for himself and his son. In return, they were to protect Baker’s Island from encroachment by trespassers looking to harvest wood without the approval of the selectmen.

Despite this attempt to protect its timber, Baker’s was soon deforested. Gradually it became used as pasture land by Salem farmers who transported their livestock there for the summer.

In 1678 and 1679, the town leased Baker’s Island to John Turner, a successful Salem merchant, for 3 pounds a year. Turner then erected a summer home there.

The town retained the right to use the island for its own purposes, and in 1685 the Salem selectmen decreed that all cotton imported from smallpox-ravaged Barbados should be off-loaded at Baker’s Island to prevent the spread of the disease.

Baker’s Island stayed in the Turner family until 1770, when John Turner III sold it to John Erving of Boston. For the next century, Baker’s Island was used by a succession of owners and their tenants for a summer retreat, farming, or a combination of the two.

While the island may have been viewed by the Turners and later owners as a delightful summer sanctuary, to local mariners Baker’s, the Miseries, and the reef- and ledge-filled waters surrounding them were threats to navigation. Finally, in 1791, after some intense lobbying and fund-raising on the part of the Salem Marine Society, a 57-foot warning beacon was erected on Baker’s Island.

A few years later this beacon was replaced by a pair of lighthouses affectionately known as Ma and Pa Baker (Ma Baker was later demolished). The twin lighthouses sat along with a keeper’s cottage on a 10-acre parcel taken over by the federal government.

The portion of Baker’s Island not owned by the government was purchased in 1877 by a homeopathic doctor from Salem named Nathan Morse. The doctor immediately enlarged a cottage on the island for himself and began construction of a hotel. The hotel opened for the season in 1888 and was called the Winne-Egan, meaning “beautiful expanse of water.”

It had 50 guest rooms and catered to seekers of “health, pleasure and needed rest.” Some of the food to feed his guests came from Morse’s island vegetable farm. He also had a small herd of cows. Fresh water was provided by a pond that the doctor had enlarged and by a well.

Hotel guests could sail, fish, swim, play tennis, or take a quick trip around the hotel’s six-hole golf course. Morse also organized a variety of cultural activities for his guests, including plays, concerts, and lectures. What the health-conscious doctor did not offer was alcohol. The Winne-Egan catered to those more interested in health than hooch.

The Hotel Winne-Egan in its busiest summer attracted more than 1,000 visitors. The popular inn lasted until 1906 when an accidental fire burned it to the ground.

While his hotel is gone, Morse’s legacy lives on. Today, Baker’s Island features the private summer colony, some 55 cottages in all, that began developing with the doctor’s encouragement during his years as the island’s owner.