Salem has long been recognized for its outstanding collection of pre-20th century buildings. Bryant Tolles, Jr. in his Architecture in Salem (Essex Institute, 1970), notes that of the “smaller, eastern seacoast communities, Salem exhibits the richest and most comprehensive variety of styles, building types, and building practices.” 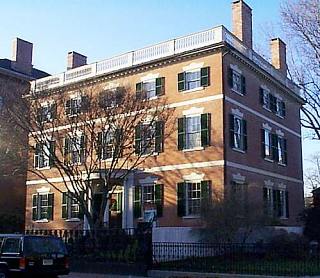 Many of the city’s finest mansions were built for wealthy shipping merchants in the decades following the American Revolution. Some are still maintained as private residences while others, including the Gardner-Pingree House and the Stephen Phillips Memorial Trust House, are now operated as museums.

A number of those mansions, however, have evolved in most interesting fashion into headquarters for social service agencies, meeting places for private fraternal organizations, housing for senior citizens, or civic institutions.

A few of these buildings have connections to Captain John Bertram, Salem’s beloved merchant-philanthropist. Bertram’s original mansion on Winter Street is a still a private residence, but the Italianate home that he built on Essex Street in the 1850s was donated to the city for a public library a few years after his death in 1882.

In 1876 Bertram lent the northern half Joseph Fenno House at 12 Hawthorne Boulevard to the newly-organized Woman’s Friend Society. When over the next five years the society proved that it was stable, it was given the property outright by Bertram’s daughter Jennie Emmerton in accordance with a provision in his will.

The Woman’s Friend Society later purchased the other half of the building and built an ell-shaped addition.

John Bertram also founded a home for aged men, in 1877. That institution was originally located in the Joseph Waters House (1806-7) at the corner of Derby and Turner Streets. Waters was a wealthy shipping merchant who supervised the building of the Salem’s greatest fighting ship, the frigate Essex, in 1798.

In the late 1920’s the home for aged men moved out of the Waters mansion, which eventually became a Polish social club. The Derby Street building was later acquired by the House of the Seven Gables Settlement Association as a home for its social work programs and renamed for the museum’s founder, and John Bertram’s granddaughter, Caroline Emmerton.

The new home of the Bertram Home for Aged Men at 29 Washington Square had been built for John Forrester in 1818-19. The brick Federal mansion was acquired in 1834 by George Peabody, a successful merchant and accomplished musician.

Peabody lived in the house for nearly 60 years. and added the one-story dining room. Here he entertained Henry Wadsworth Longfellow, the Swiss naturalist Louis Aggasiz, and many other notable 19th century personages.

For the first quarter of the 20th century, before it was purchased by the Bertram Home for Aged Men (now known as the Bertram Home), the Washington Square mansion was occupied by the Salem Club. This private men’s club featured a dining room, a billiard room, and a full schedule of social, cultural, and educational programs.

Just opposite the Salem Common from the Bertram Home, at 94 Washington Square, stands the former mansion of merchant-statesman Nathaniel Silsbee. The residence was built in 1818-9 and was a private residence until 1906 when it was acquired by the Knights of Columbus.

Another federal-style mansion, at 180 Derby Street, now houses the Brookehouse for Women. The massive brick home was built for Benjamin Crowninshield (1775-1851) between 1810 and 1812 and may have been designed by Salem’s famed architect-woodcarver, Samuel McIntire.

Crowninshield made his fortune in the East India trade and served as secretary of the navy under Presidents Madison and Monroe. The latter stayed in Crowninshield’s waterfront mansion during his visit to Salem in 1817.

William Crowninshield Endicott, who would later serve as a member of the Massachusetts Supreme Judicial Court and secretary of war under President Cleveland, was born in this house in 1826. General James Miller, the hero of the Battle of Lundy’s Lane in New York in the War of 1812, lived here from 1825 until his death in 1851.

For most of those years Miller served as collector at the nearby Custom House.

In 1861 the mansion was purchased by another Salem merchant, Robert Brookehouse, who then donated it to what was at the time called the Association for the Relief of Aged and Destitute Women. The building was subsequently enlarged and today serves a residence for retired women.

The headquarters of the Children’s Friend and Family Service Society of the North Shore, Inc. at 48 Bridge Street was also built as a private residence during Salem’s East India trade era. The substantial brick home, whose design has been attributed to Samuel McIntire by architectural historian Fiske Kimball, was erected for leather factory owner Thomas Woodbridge in 1809-10. It was briefly owned by the Society for the Preservation of New England Antiquities in the 1940s and acquired by its current owners in 1955.