The Grimshawe House and Elizabeth Peabody

Peabody and his wife Elizabeth had three daughters, Elizabeth, Mary, and Sophia. “Lizzie” was an educator and cultural gadfly who was already well known in Boston and Salem. Thanks to her a number of soon- to be famous men came calling at the Peabody’s modest home. 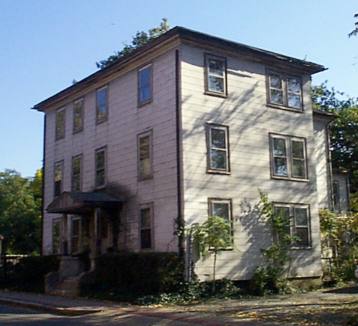 The Grimshawe House on Charter Street

Two of those men were Nathaniel Hawthorne, a budding author who would later use the Charter Street home as a setting in his “Dr. Grimshawe’s Secret” and “Dolliver’s Romance,” and the educator Horace Mann. Nathaniel would marry Sophia Peabody in 1842. A year later her sister Mary wed Horace Mann, the first Massachusetts Superintendent of Schools.

Elizabeth, the “introducer,” never married but became famous as a feminist, educator, and author. She ran two schools of her own and worked at Bronson Alcott’s controversial Temple School in Boston. Elizabeth later opened the nation’s first kindergarten on Beacon Hill in 1861. She was largely responsible for the spread of the kindergarten movement in America.

Ms. Peabody later became one of America’s first female publishers. Using the name E.P. Peabody , to disguise her gender, she printed.anti-slavery tracts, childrens’ books by Nathaniel Hawthorne, and the “Dial,” the journal of the Transcendentalists who gathered at her Boston bookstore. She also provided a forum for early women lecturers Harriet Martineau and Margaret Fuller.

Elizabeth’s writings reflect her connections to important men of the times: “Reminiscences of Rev. William Ellery Channing,” “Record of a School” (Alcott’s Temple School), and “A Last Evening with Allston” (painter Washington Allston).

After her death in 1894 Lizzie’s friends opened The Elizabeth Peabody House, a combination social service agency and kindergarten, in Boston to carry on her work.