The 1997 Christmas House Tour gave many area residents their first exposure to the Salem Athenaeum, Salem’s “other” library on upper Essex Street.

The Salem Athenaeum, while not as well known as the Peabody Essex Museum, House of the Seven Gables, or even the former Salem Lyceum Society, was the city’s first permanent cultural institution. While organized as the Athenaeum in 1810, its roots actually date back to the founding of the Social Library in 1760 by Massachusetts Supreme Court Justices Nathaniel Ropes and Benjamin Lynde, the legendary physician, Edward Augustus Holyoke, and other members of Salem’s cultural elite. 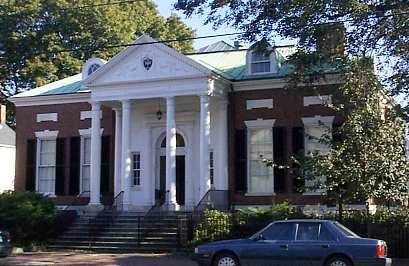 Fifty years later, the Social Library merged with the newer Philosophical Library. The latter had been organized in 1781 after the capture of the world reknowned Kirwan Scientific Library by a Salem privateer during the American Revolution. The result of the merger was the Salem Athenaeum, a private library with limited membership of 100 patrons.

Between 1810 and 1855, the new library occupied space at various locations in downtown Salem including the former Custom House Building on Central Street, Essex Place (now 177 Essex Street), and the Lawrence Block at the northeast corner of Washington and Front Streets. In 1857, thanks to a bequest made by Caroline Plummer in memory of her brother Ernestus, the Athenaeum moved into its brand new home at 132 Essex Street.

The Athenaeum played a central role in the development of many of Salem’s men of genius. Nathaniel Bowditch, “the most famous of early New England scientists” (Dirk Struik, Yankee Science in the Making), devoured mathematics and astronomy texts in the Kirwan collection as a teenager, thus laying the foundation for his seminal navigational text, The New American Practical Navigator. Nathaniel Hawthorne, using his Aunt Mary’s membership card (which she eventually gave to him), borrowed extensively from the Athenaeum’s collection of novels, histories, autobiographies, and poetry.

Many other Salem citizens, including the great Impressionist painter Frank W. Benson and former U.S. Senator Nathaniel Silsbee, have availed themselves of the Athenaeum’s resources. Today, a growing number of Salemites, members, associate members, and interested citizens, make their way to library’s “new” home (1906) at 337 Essex Street to satisfy the thirst for intellectual and cultural enrichment that they share with their illustrious predecessors.