The year was 1925 and the civic minded folk of Salem in the process of building a modern hotel for their fair city had a bit of a problem.

The problem wasn’t money or location. More than eighty per cent of the estimated $750,000 to build the hotel had been raised by a cadre of volunteer stock salesman. And the Salem Marine Society had graciously agreed to sell its Franklin Building adjacent to the Salem Common and let it be bulldozed to make way for the new lodging house.

Nor was there a problem with the building itself. The new hotel had been beautifully designed by Smith and Walker of Boston with significant input from highly-respected local architect Philip Horton Smith. Construction was well underway and proceeding smoothly. 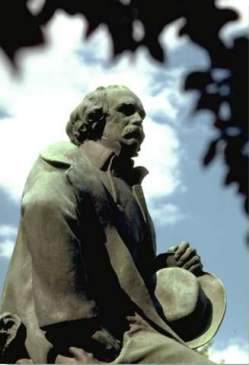 The problem was a name. The city’s highly touted “modern hotel for Salem” was nearing completion and no one was quite sure what it would be called.

The dilemma was eventually resolved by Judge Alden C. White. White was the president of the Hawthorne Memorial Association, an organization responsible for raising the funds to buy Bela Pratt’s statue of Nathaniel Hawthorne and moving it to its present location on Hawthorne Boulevard. Why not, White asked, name the hotel for the author of The House of the Seven Gables and The Scarlet Letter. Not only was he the city’s most famous native son, but also the new hotel was being built in the heart of a neighborhood with numerous ties to the author’s life in Salem.

White knew of what he spoke. Hawthorne was born just a block south of the hotel site in 1804 in a home at 27 Union Street (later moved to the House of the Seven Gables complex). Four years later, after his father’s death on a voyage to South America, Nathaniel moved next door to 10 Herbert Street where he lived with his mother and two sisters and his mother’s family intermittently until 1845. Hawthorne wryly referred to the house as “Castle Dismal”, but it was here that he began his literary career in the decade after his graduation from Bowdoin College in 1825.

During that decade, Nathaniel often visited his cousin, Susannah Ingersoll, at her now-famous waterfront home on Turner Street. Susannah’s description of the house’s appearance in earlier days gave Hawthornev the title for his famous novel, The House of the Seven Gables. 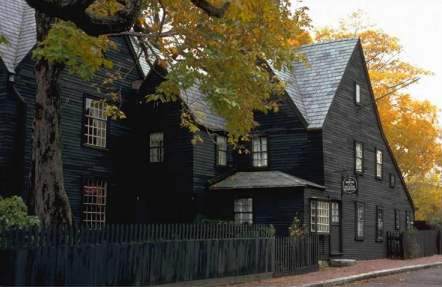 Shortly after the publication of his Twice Told Tales in 1838, Hawthorne also became a regular caller at the Peabody home on Charter Street. There the attraction was Sophia Peabody, the youngest of three sisters and the author’s future wife. The adjacent Charter Street Burying Point provided names for fictional characters in many of his literary works.

Prior to meeting Sophia, Hawthorne was briefly involved with the twenty-something daughter of former United States Senator Nathaniel Silsbee. The lovely but dangerous Mary Silsbee held court at her father’s mansion on Washington Square, now owned by the Knights of Columbus, and it was there the up and coming author was summonsed in 1838. Their brief affair came to a nasty end when Ms. Silsbee goaded Hawthorne into challenging publisher John L. Sullivan to a duel over some invented slight to her sacred honor.

A stone’s throw from the Silsbee home stands Hawthorne’s final Salem residence. The author and his growing family moved to 14 Mall Street in 1847 and lived there until their departure from Salem in 1850. It was in the Mall Street house, shortly after his removal from his Custom House post in 1849, that the aggrieved author penned his great American novel, The Scarlet Letter. 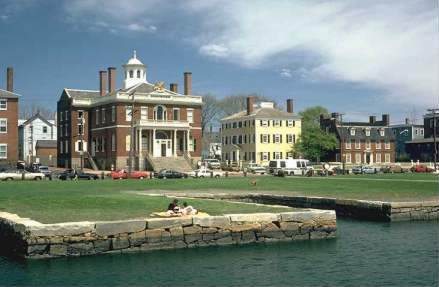 Hawthorne’s former office can still be seen in the Custom House on Derby Street, now part of the Salem Maritime National Historic Site. The financially-strapped author found temporary relief when he was hired as Surveyor of the Port of Salem in 1846. The job was easy but brief — his three year tenure ended in 1849 after a lengthy and highly publicized campaign by political enemies.

And lastly, while Hawthorne was too shy to appear on stage at the Salem Lyceum on Church Street, he did serve a term as Corresponding Secretary for the Society’s lecture series in 1848-9. His speakers included friends Henry David Thoreau and Ralph Waldo Emerson and his brother-in-law, Horace Mann.