The Museum School class c 1882. Frank Benson, in straw hat, is second from right Courtesy of the Peabody Essex Museum

Benson was born in Salem in 1862, and raised at what is now 46 Washington Square. His father George, an important cotton merchant, encouraged all of his children to participate in the smorgasbord of cultural activities that Salem had to offer in the late nineteenth

century from Lyceum lectures to dance classes at Hamilton Hall, but drew the line when young Frank decided he wanted to pursue a career in art. His mother, a watercolorist, intervened, and Benson enrolled at the new Museum School in Boston in the fall of 1880.
Salem, Massachusetts has never been known as an art community, but it can lay claim to a man who was called “the most medalled painter in America” by the Boston Transcript in 1914: Frank Weston Benson.

At the Museum School Frank received a classical art foundation under the tutelage of Otto Grunderson and Frank Crowninshield. Frank then spent two years at the legendary Academie Julien in Paris. Here daily trips to the Louvre to copy masterpieces were supplemented with life drawing sessions and critiques by established masters. Benson returned to Salem in 1885 and went on to teach for two years at the Portland (ME) School of Art. By 1888 he was back in Salem and married to Ellie Peirson. The following year he and Edward Tarbell were hired to teach at their alma mater, the Boston Museum School. Benson, an extremely popular teacher, would hold this position until 1912 and would remain involved with the school until 1930.

Benson remained an important part of the exciting Boston art scene for half a century. He maintained a studio in the Back Bay and was a member of the Copley Society and a founder, and for 13 years President, of the Boston Guild of Artists. Benson routinely exhibited at the Boston Art Club and the St. Botolph’s Club.

In, 1897, Benson became a charter member of the Ten American Painters. The group included some of America’s most important Impressionists, including Childe Hassam, and reinforced Benson’s move towards the impressionist style. His portraits and figures were now often painted en-plein-air, and usually at the family summer farm on North Haven Island in Maine. Some of his most memorable works depicted members of his growing family on holiday. 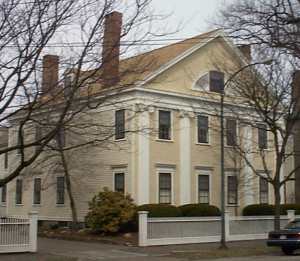 Paintings and etchings depicting the sporting life dominated the non-figurative portion of Benson’s artistic output. He was an avid fisherman and duck hunter who made annual trips to Canada to fish and maintained a hunting shack on Cape Cod. Most of his 300 plus etchings depicted birds in flight, as did many his watercolors and washes.

No matter what the medium, Benson was wildly successful both financially and in terms of recognition. He was signed on by the prestigious MacBeth Gallery in New York in 1914 and eventually agreed to reduce their sales commission on his work just to keep him in their fold. Benson’s work was so popular that from the 1920’s on it was often sold while still on the easel. His income for the month January 1929, was $68,000, certainly enough to cover the mortgage on his new Chestnut Street home.

During his career, Benson won just about every major medal in America. His work was included in many of the era’s most prestigious art shows and today can be seen at the Museum of Fine Arts in Boston, the Metropolitan Museum In New York, the Art Institute of Chicago and almost every other major museum in America.