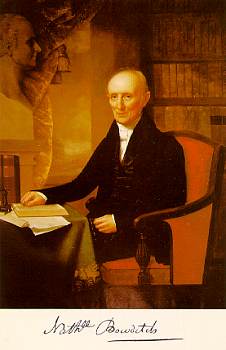 Nathaniel Bowditch was born in Salem in 1773, the fourth of seven children. His childhood as we know it was short-lived: at the age of ten he was taken out of school to work in his father’s cooperage. Two years later he was apprenticed to a local ship chandler.

The young teen spent his evenings teaching himself Latin and Greek and studying mathematics, science and astronomy. When his apprenticeship ended, Bowditch shipped out in 1795 on the first of five voyages to the East Indies. While at sea he spent his free time poring over the navigational tables prepared by John Hamilton Moore of England. Bowditch found and corrected over 8,000 errors.

The corrected tables were included in Bowditch’s The New American Practical Navigator published in both England and America in 1802. The 594 page volume also included information on navigational law, measurement, and terminology. The book was easily understood by sailors with limited education. It became, along with “a Bible, a chest of clothes and mother’s blessing”, an essential part of every seaman’s gear.

Bowditch, armed with substantial royalties and honorary Masters and Doctorate degrees from Harvard, retired from sea turned to other pursuits. He helped organize the East India Marine Society which collected and disseminated navigation information among its sea captain members. In 1805, Bowditch also published a navigational map of Beverly, Salem, Marblehead and Manchester harbors. 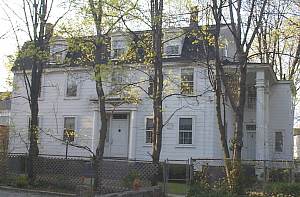 Nathaniel Bowditch was born here in Salem in 1773

For twenty years, Bowditch was employed by the Essex Fire and Marine Insurance Company as its President. With his substantial income he was able to buy a home for his growing family in the better part of town. In 1823, Bowditch moved to Boston to work as an actuary for for the Massachusetts Hospital Life Insurance Company at five times the salary.

Bowditch needed the money to finance the project that was to occupy most of his available time for the last two decades of his life: the publication of his translation of Pierre Laplace’s Mecanique Celeste. This important scientific work examined the relationship of Newton’s theory of gravity to astronomy and included research of other European Newtonian scientists. Bowditch spent $20,000 of his own money to make this work available to American scientists. 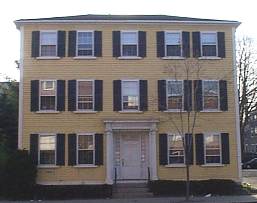 For his unceasing efforts in the name of American science, Bowditch, who also published some thirty papers in various scientific journals, was named to every important scientific society in America and Europe. The New American Practical Navigator is now in its 78th printing.