The roster of great Salem shipping merchants is an impressive one: Elias Derby, William Gray and Simon Forrester, to name just a few, were three of America’s first millionaires. But if the true measure of a man is how he treats those less fortunate than himself, John Bertram is unquestionably the “cream of the Salem merchant crop”. 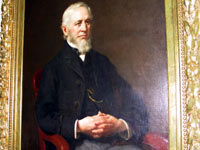 Bertram was 11 years old when his family came to America in 1806 from the Isle of Jersey. He shipped out to sea for the first time as a cabin boy on the Hazard during the war of 1812. He spent much of the war on board British prison ships, and returned home penniless and barefoot.

Undaunted by the experience, Bertram promptly returned to sea. His natural business instincts served him well and, by 1830, the young seaman was able to buy a one quarter interest in his first ship.

By 1836, Bertram owned a fleet of vessels and was actively trading in Batavia, Sumatra, Zanzibar and other foreign ports.

When gold was discovered in California in 1849, Bertram added to his fortune by shipping supplies to prospectors in the gold fields. Intrigued by the possibilities of western expansion, he built, and then managed, a number of railroads in the western United States. 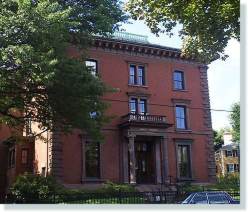 As a result of his many business ventures, John Bertram became a very wealthy man. Much of his fortune was used for the benefit of others: he was the primary organizer and financial supporter of Salem Hospital (1873) and funded a home for aged men which still operates today. Bertram also provided coal for heat to many of Salem’s poor, and left a fund to the city to continue that tradition even after his death. Also in his will was a substantial bequest to the Children’s’ Friend Society.

Throughout his long life, Captain Bertram was constantly helping those in need or just trying to get a start in business. Shortly after his death in 1882, John Bertram’s family added to his legacy by donating his Essex Street mansion to the city of Salem for a public library.