Poor Roger Conant gets no respect.

Because of Salem’s reputation as the “Witch City”, and because Henry Kitson’s bronze statue of the city’s founding father stands in front of the salem witch museum, many visitors assume that the likeness of Conant as one respected magazine erroneously called it, that of a “determined sorceress”

Conant deserves better. it was his vision and faith that sowed the seeds of the new plantation at “this place called Naumkeake” in 1626, shortly after the demise of the English fishing settlement at Cape Ann. And it was Conant’s tenacity and commitment- with probable encouragement from his wife, Sarah, who had just moved for the fourth time since leaving the comforts of London in 1623-that made the colony a success despite disease, depression and the powerful lure of the warmer Virginia climate. 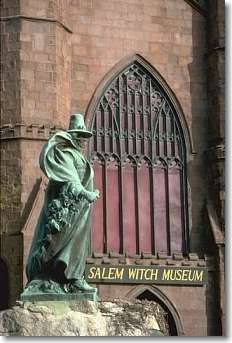 And it was Conant’s decision to stay at Naumkeag and to cooperate with the settlers sent over by the Massachusetts Bay Company in 1628, even after the company replaced him as the legal head of the plantation, that gave the settlement it’s new name: Salem, “city of peace.”

Roger Conant not only stayed, he devoted his life to serving the town and colony. he was admitted to the first church in 1628 and chosen a freeman, or voting stockholder, of the Massachusetts Bay Company in 1630. Conant was one of the first two Salem representatives to the colony’s general court or legislature, and was repeatedly elected a selectman by the people of Salem.

When communities were granted the right to establish district courts by the legislature, Roger Conant became a fixture on the Salem quarterly juries for sixteen years. he was frequently called upon to establish boundaries for new communities as far away as Boston and Saugus. In 1636, Conant, John

Woodbury, Richard Trask and John Balch, all original settlers of the town, served on the committee which created separate lots from remaining public lands in Salem. in return for their efforts, these men were each given 200 acres of valuable agricultural land in the Bass River.

In 1659, Roger Conant led the drive by Bass River residents to form their own church. By 1667 they had their church and, a year later, Bass River became the new town of Beverly. Conant was given the task of establishing the boundaries between Salem and Beverly and was the latter’s most important citizen. Before giving up civic life in 1671, he served briefly as both selectman and juror and, as he had done in Salem, oversaw the laying out of Beverly land grants.

All of Roger Conant’s service was rendered against a backdrop of personal tragedy. He had to endure the death of a daughter and four of his five sons. But he trudged steadily on, working for the common good right up until his own death in 1679. His perseverance in the face of adversity, even more than his status as Salem’s founding father, is his true legacy.