Salem, Massachusetts possesses one of the finest collections of pre-twentieth century buildings of any small city in America. And at the heart of that collection are the magnificent Federal mansions built by the notable architect and carver of Salem, Samuel McIntire. 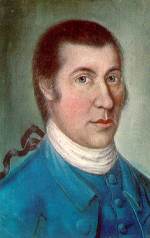 Little is known about McIntire’s personal life. He was born in Salem in 1757 and grew up in a family of housewrights. Samuel married Sally Fields in 1778, and the couple had one son. He built a simple home and workshop on Summer Street in 1786. His favorite hobby was playing and teaching music.

McIntire’s training came from his father and from books. He and his brothers, Joseph and Angler, began their careers as housewrights and carpenters while in their teens but, early on, Samuel’s work caught the eye of Salem’s pre-eminent merchant, Elias Hasket Derby. Over the next quarter century, McIntire built or remodeled a number of homes for Derby and members of his extended family. McIntire also worked occassionally on Derby’s vessels, and wasn’t averse to fixing a wagon or building a birdhouse if his patron so desired.

“King” Derby’s stamp of approval opened many other doors for McIntire, who went on to design and build mansions for John Gardner, Jerethmiel Peirce, Simon Forrester, and other wealthy Salem shipowners. He also built, on elegant Chestnut Street, a function hall (named for Alexander Hamilton) and church for the town’s merchant class. McIntire also designed the former Salem Court House and Registry of Deeds.

After 1793, Samuel McIntire worked exclusively in the architectural style developed by Robert Adams in England and brought to America by the great Boston architect, Charles Bulfinch. The delicate Adamesque style, which emphasized decorative elements and ornamentation, was tailor made for McIntire whose unerring sense of design and proportion was exceeded only by his skill as a woodcarver. Carved swags, rosettes, garlands, and his signature sheaths of wheat dominate wood surfaces in McIntire homes built between 1793 and his death in 1811.

McIntire-carved cornucopias and other motifs can also be found on furniture made by master craftsmen of the era. William Bentley, the noted Salem diarist, compared McIntire’s furniture “to that of a young Duncan Fyfe or of the best of the Philadelphia carvers of the Chippendale period.” McIntire also produced a number of figureheads for Salem vessels and statues of eagles for the Custom House on Central Street and for the arches that once graced the entryways to the Salem Common.

The City of Salem paid tribute to Samuel McIntire in 1981 by giving his name to the largest (407 buildings) of its four Historic Districts.