On the facade of the Salem Common bandstand sits a deteriorating bronze plaque placed there by the Salem Cultural Arts Commission on July 4, 1976. It honors the great Salem band leader, Jean Marie Missud.

Jean Missud was born in Nice, France, in 1852 and showed an aptitude for music at an early age. He played clarinet for a time for the Prince of Monaco’s own bandmaster. Then, when he was 17, he successfully auditioned for a position in the USS Sabine’s ship band. The young Frenchman’s naval career lasted only as long as the cruise. Shortly after the Sabine arrived in Boston in 1870, Missud left the seafaring life to pursue a career in music. 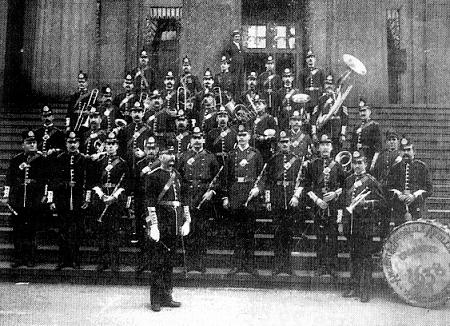 Missud started his own quintet and also played for a time with the legendary Harry Brown Brigade Band. Eventually he landed a spot in the Salem Brass Band, which had been organized in Salem in 1837 for the Salem Light Infantry and had achieved national prominence in the 1850s under the leadership of Patrick Sarsfield Gilmore

In 1878 the ambitious Missud left the Salem Brass Band to organize a similar unit for the Salem Light Infantry’s rivals, the Second Corps Cadets. He would lead his Salem Cadet Band for the next 63 years, setting a national record for band longevity that has never been broken.

The Salem Cadet Band featured woodwind, brass and percussion instruments. Initially it consisted of an even dozen musicians; by 1900 that number had grown to almost 30.

The uniformed unit accompanied the Second Corps Cadets to parades and musters and played regularly on Salem Common and at Salem Willows. For many years the band’s Sunday concerts at the Willows were restricted to programs of sacred music.

One of the most frequent venues for Missud’s band was Hamilton Hall on Chestnut Street. The Salem Cadet Band routinely provided the music for the Salem Assemblies at the hall, playing a mixture of waltzes, two-steps, lanciers and an occasional “Portland Fancy.”

Many of the pieces the band played at these popular dances were created by Missud, who was also a talented and prolific composer. In 1881 a collection of those works was published in Boston under the title “Salem Assemblies Waltzes.” Missud also rearranged for bands many other popular tunes, including “America the Beautiful” and “Federal Street,” a Protestant hymn written by his Salem friend Henry Kemble Oliver.

When they weren’t playing locally at policemen’s balls, graduations, dance classes and other civic events, the Salem Cadet Band was touring major cities in America and Canada. In 1903 the band went to England with Boston’s prestigious Ancient and Honorable Artillery Co., which adopted Missud’s unit as its official regimental band.

At about that same time the Salem Cadet Band began performing as a philharmonic orchestra on selected Sunday afternoons in winter. Missud conducted these concerts, which often featured soloists from the Boston Symphony Orchestra, for more than three decades.

During its long history no important Salem event was complete without an appearance by the Salem Cadet Band. In 1925 the group led the civic parade on the day the Hawthorne Hotel opened for business. The following year it was chosen to play at a Grand Ball held in the Second Corps Cadets Armory on Essex Street in commemoration of Salem’s tercentenary.

The armory would be the scene of another important chapter in the life of Jean Missud and his musicians. On April 14, 1928, more than 2,000 people gathered there to celebrate the 50th anniversary of the Salem Cadet Band — and to show their affection for its humble leader.

Other honors (including an honorary master’s degree from Tufts University, where his band had played for 50 consecutive commencement celebrations) awaited Jean Missud. Perhaps the most exciting of these was given him a few years before his death in 1941, when the conductor joined an overflow audience at the armory to watch America’s greatest band leader, John Phillip Sousa, in action.

Part way through the concert, Sousa summoned Jean Missud to the stage and handed him the baton. The gesture was the ultimate tribute to Salem’s greatest and most beloved band leader.