While he will never be considered the equal of a Fitz Hugh Lane or Frank Benson, Philip Little has certainly earned his place in the North Shore’s pantheon of artists.

Little was born in 1857 on Little’s Point in Swampscott. As a young man he was groomed to work in his father’s cotton and wool business, attending the Massachusetts Institute of Technology until illness forced him to drop out.

After working in his father’s firm for a brief time, Little decided he would prefer a career in design and enrolled at the Lowell Institute. In 1880, after completing his studies and spending a year learning lithography at a Boston firm, he entered the School of the Boston Museum of Fine Arts.

At the Museum School, Little met another aspiring artist, Frank Benson of Salem. When his formal art education ended, Little moved to Salem with his new wife, Lucretia Jackson, and began sharing a studio with Benson at 2 Chestnut St. Eventually the two men would be neighbors on this magnificent Salem boulevard, Little living at No. 10 and Benson at No. 14.

Little pursued dual careers as an artist and civic leader. Wealthy and generous, he became an important public servant in his adopted Salem. Over the course of his long career he served on both of the city’s legislative bodies — the board of aldermen and the common council — as well as the municipal school and health boards and the city’s committee on military matters. The artist, who looked as dashing in a military uniform as he did in his cutaway and Inverness cape, also served in the Massachusetts Militia for a decade and a half. By the time he retired in 1901, Little had attained the rank of major.

When he wasn’t busy with governmental affairs, or with his duties as curator of art at Salem’s Essex Institute, Little was carving out a reputation as a respected American painter and printmaker “untainted” by European art training.

He drew heavily on the New England coast for his subject matter. For much of his adult life, he summered on MacMahan Island in Maine and every fall he would return home to Salem laden with stunning Impressionist scenes of the Maine coast.

Little did not, however, ignore the North Shore landscape. Hanging on the walls of museums around the country are works entitled “Where Hawthorne Wrote and Derby Traded,” “Transport Going East Off Marblehead,” and “The Upper Ipswich River.” One of his etchings, “Salem’s Old Wharves,” is in the collection of the Bibliotheque Nationale in Paris. 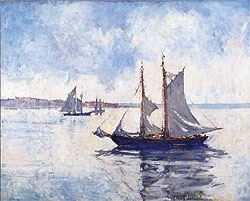 From 1914 until his death in 1942, Little worked in a studio he built on tiny Daniels Street Court on Salem Harbor. The one-room structure was seldom needed in the summers as he was in Maine, so Little generously made it available to fellow artists. The noted printmaker Philip Kappel used the space off and on for more than a decade in the 1920s and 1930s. Richard V. Ellery, a Danvers artist then living in Marblehead, borrowed the studio when he was chosen by the Works Progress Administration (WPA) to produce historical murals for both communities.

Little was just as generous with his paintings. One group of oils was donated to the Salem YMCA in memory of his first wife after her death in 1938. Others were given to the city and were hung in various municipal buildings including the library, City Hall, and Salem High School. A large Little mural still graces the wall of the Eastern Bank on Washington Street. 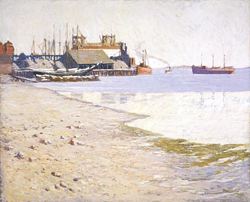 Little began exhibiting his work while still at the Museum School and continued to do so for the rest of his life. He won a number of awards in national competitions and was a member of numerous art organizations including the National Art Club, the American Society of Etchers, and the Portland Society of Artists in Maine. Little was also a founding member of the prestigious Guild of Boston Artists.

The artist would finally achieve national prominence in his early 50s when, in the span of just a few years, he was given one-man shows in St. Louis, Worcester, Providence, and Utica, N.Y. Museums and libraries began acquiring his work in earnest, and today Little’s work is included in the collections of many important art institutions throughout the country

Philip Little died in 1942. He was survived by his second wife, the former Caroline King, and a son, Philip, Jr.